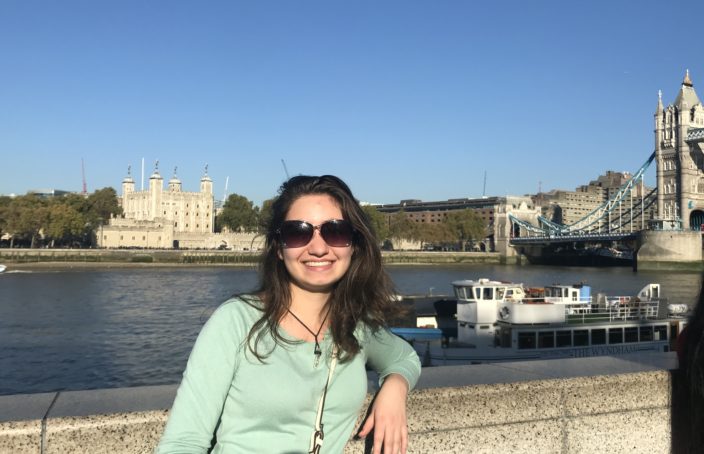 This last week I had the opportunity to follow my resolution to get out and explore on the weekends in a big way: I got to go to London, England! The Irish fall studies group is allowed two free weekends, a long one of four days and a short one of two and a half days, and my friend/roommate Katie and I decided that we were going to invade–that is, tour–London for our long weekend. Having never been before, I was eager to see all the sights:  Big Ben, Buckingham Palace, the London Eye, Trafalgar Square, the Tower of London, and Shakespeare’s Globe were all on our itinerary. 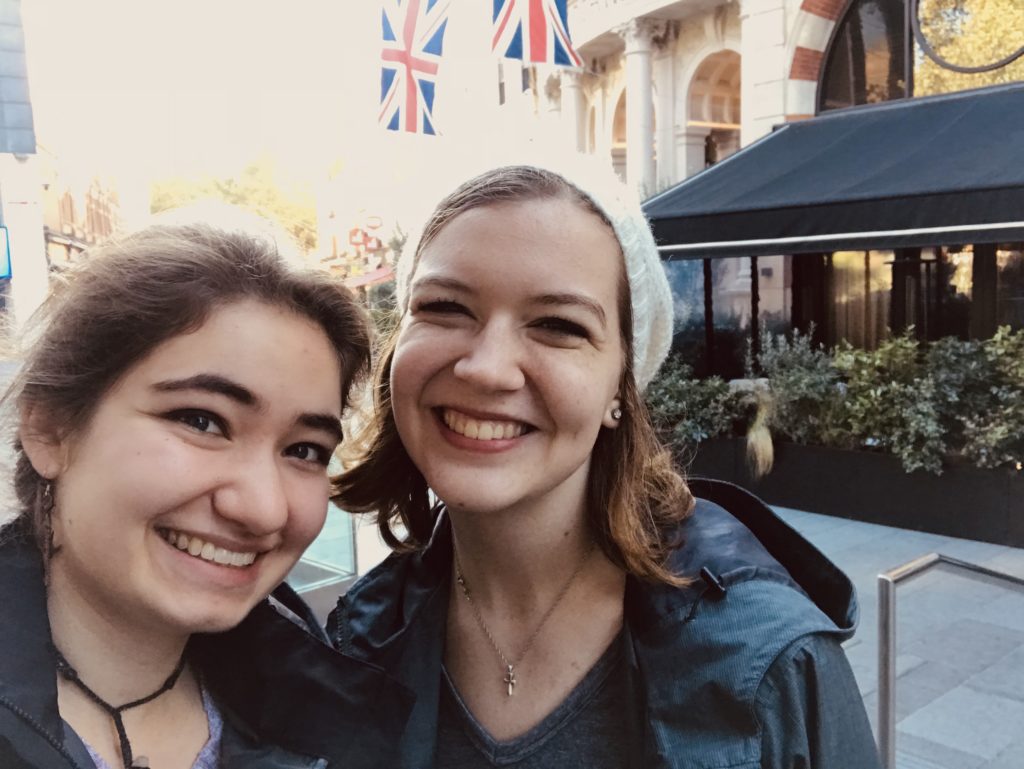 Katie and me buying tickets for the show

Being semi-broke college students, though, we knew we wanted to travel pretty cheaply, and we were also saving up for a specific experience: theater tickets for one of the many plays in London’s theaters. Katie and I are both theater fans (we actually met while participating in the theater department at JBU), so when we had the opportunity to see The Play That Goes Wrong by Lewis, et al., we were delighted to experience a comedy that captured the essence of theater production work so vividly and hilariously.

Seeing the play was the best part of the trip for the two of us, but when we were originally planning the trip my only request was to go to the British Museum. Katie kindly humored my inner historian side, and I was free on Saturday morning to wander through exhibit after exhibit to my heart’s content. Having spent my summer on the JBU archaeological dig in Jordan, the artifacts from ancient Assyria and Egypt left my mind boggled as I realized just how rare and exceptional these intact and well-preserved pieces were. Even now that it’s been a few days, I still can’t quite fathom that I actually saw the Rosetta Stone in person! 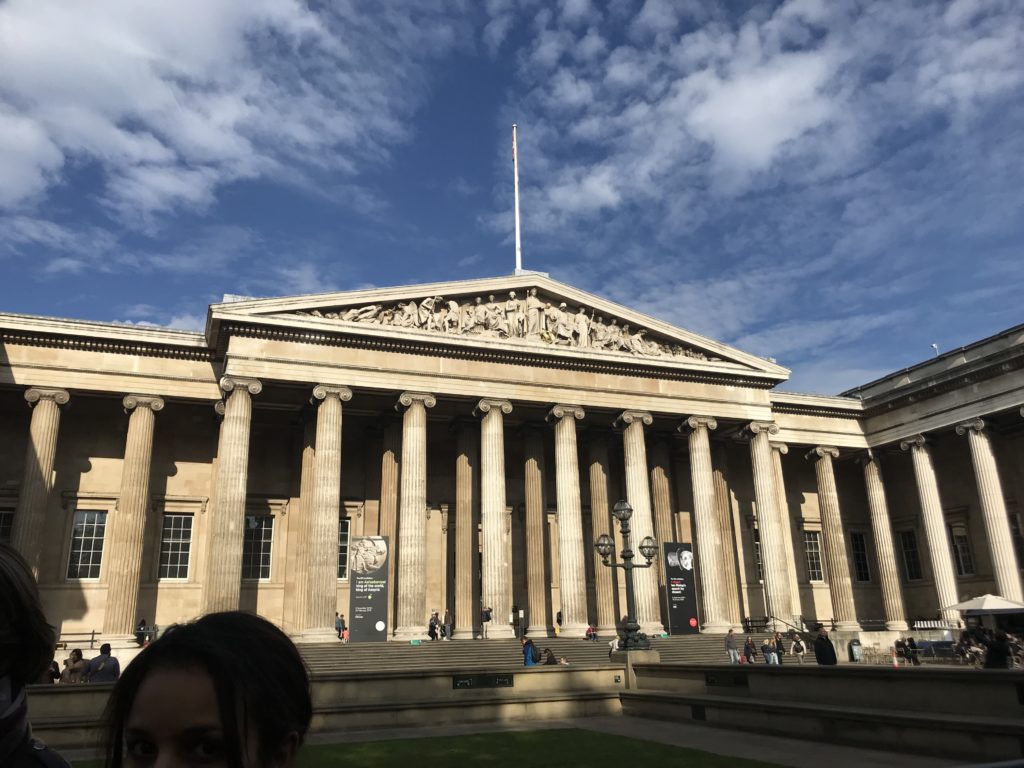 While there were definitely momentous parts of the trip–both moments of drama, such as racing to make our bus to get from the airport into London, and elation, such as laughing so hard I couldn’t breath as I watched a play’s set fall apart on stage–there were a lot of quiet periods throughout the trip. I can become too obsessed with details and sticking to a schedule. When Katie and I intentionally decided to take things slow and improvise if some activity caught our eye, it ended up being the right call. London is full of parks–small ones, big ones, they’re all over the place. There were a lot of times we would sit down–tired from walking around all day–and just relax in silence, or talk and deepen our friendship while sipping a soda or hot chocolate.

The free weekends are times to explore Europe, true. In our entire student group there were people who went to England, Portugal, Spain, and France. We all got to see new things and experience a different culture. But within the adventure is a more substantial opportunity: it’s a chance for a bit of change in the group dynamics, to get out of the house, and come back excited for a reunion. It’s also a chance to bond more with those with whom you travel. Finally, it’s a chance for mental rejuvenation. Some people need a beach day in Spain and Portugal, some need to try a plateful of delicious macarons in Paris, and some (okay, maybe just me) have fun riding the London Underground–or “Tube”–while eating a meat pasty. In the end, I would call the 2018 invasion of London by two college students an unparalleled success! 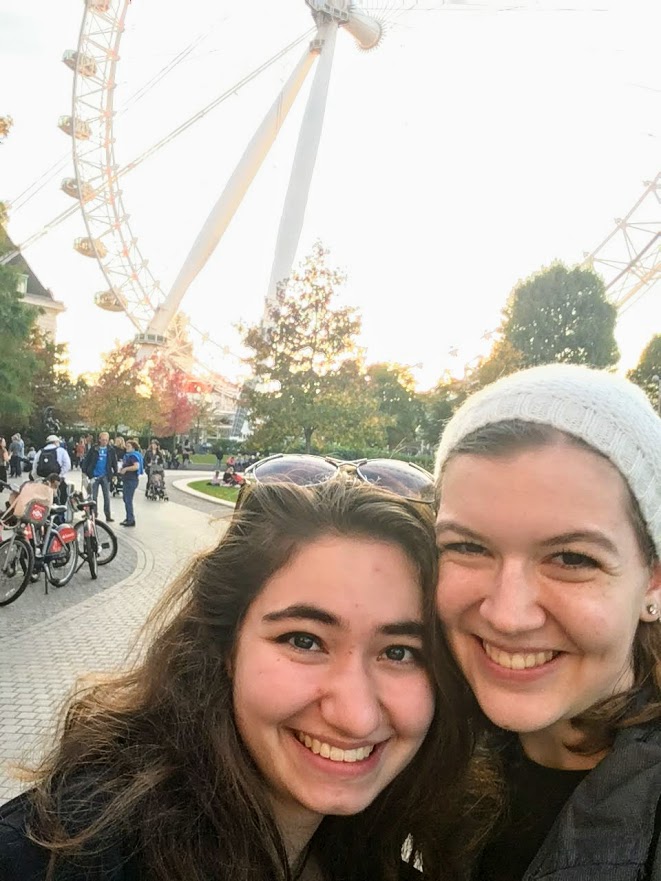 At the London Eye – Photo courtesy of Kathryn Gage