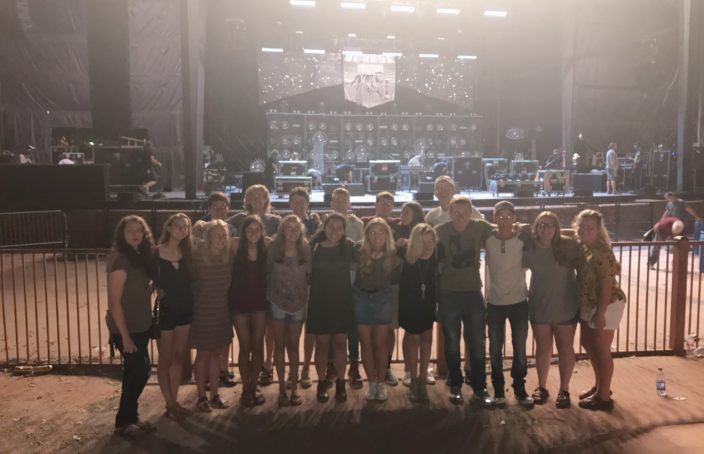 My name is Coby Dolloff, and I am a freshman Biblical Studies and English major at John Brown University. I love a good book, a good cup of coffee, or a good game of basketball. I exist to glorify God, and to enjoy Him forever.

My brother recommended I might like this blog. He was once totally right. This publish truly made my day. You…

This weekend was one for the books.

Let me preface by saying that my favorite band by far is a group called NEEDTOBREATHE. I have been following them and their music for a long time, and have always loved it. Some controversial businessmen-politicians might refer to my fandom as being “YUGE.”

So one could infer that I was pretty ecstatic to see them live in concert for the first time last Friday night in Oklahoma City.

The trip down was an adventure in itself. After rushed astronomy tests, missed gas stations, hazardous U-turns, and fine dining at Raising Cane’s Chicken Fingers, we finally arrived at the Zoo Amphitheatre.

I was not disappointed.

They were incredible; even better live than recorded. They played many of my favorite songs from the past several years that reminded me of many special people and times in my life. It was a legendary night.

As I stood listening to a song particularly meaningful to me, I experienced a rare instance in which I cognitively realized how special a moment was at the same time it was happening. I just sat and soaked it in. It reminded me of my favorite scene from one of my favorite movies, The Secret Life of Walter Mitty:

While the band was special, and the song was special, what made the moment incredible was the group of people surrounding me. I looked around and saw many of my favorite people from all different stages of my life: JBU, Link Year, and high school.

For me, there are few things more fulfilling than being in the presence of people I love from all different stages of my life.

Therefore, one of the saddest realizations of the past year for me was the thought that college and adult life is often about friend circles: friends from school, friends from work, friends from home, etc. These rarely connect, and there will never be a time when all the people I love are with me in one place. Standing there at the concert, this thought nearly put a damper on an otherwise incredible evening.

Until I realized that it is completely untrue.

There will be a time when all the people I love most are gathered in one place: The Kingdom of Heaven. In the Kingdom, not only will we be fully united with Jesus (an infinite joy in itself), but we will be fully united with our brothers and sisters in Christ. And not only those we currently know and love, but all of God’s people scattered throughout all time and space, from every tribe, tongue, and nation. What a thrilling hope.

So the concert was incredible.

Not just because of bands, or songs, or friends. But because it was a small glimpse, a small taste, of something infinitely greater to come.

As C.S. Lewis once wrote, “there are better things ahead than any we leave behind.”

My name is Coby Dolloff, and I am a freshman Biblical Studies and English major at John Brown University. I love a good book, a good cup of coffee, or a good game of basketball. I exist to glorify God, and to enjoy Him forever.