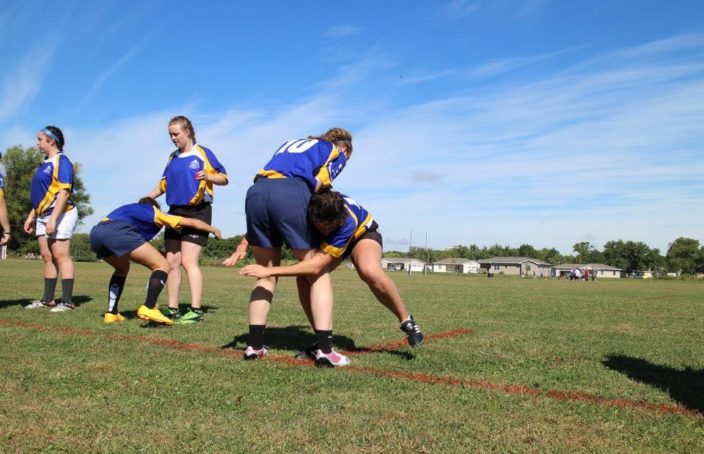 When you have three hostile ruggers converging on you, don’t just stand still with the ball. Run!

Trust me on this one, okay? Rugby is not one of those games conducive to pensiveness and careful thought. It’s a game of explosive intensity, fearless aggression and full trust in teammates. You never stop moving, gaining ground or fighting back.

College is the time to try things, to stretch your horizons and delve deep into relationships, ministries, classes, athletics and overseas study abroad adventures. At JBU, there are so many opportunities to try new things and to be involved.

I was convinced to join the Women’s rugby club during my sophomore year. Anyone who knows me will tell you I don’t play sports. But it was the rugby club’s first semester, so the whole team was still learning the rules of the game, making it a perfect time to join. Why not? Let’s give it a try!

Rugby practices were great—the girls were wonderful and I felt like a part of the team, despite my lack of ability. Tackle practices? Hah! I still make jokes about those!

Less than a month after I joined, we had our first game, part of a “rookie rumble” in Wayne, Nebraska.

I’m going to let that sink in.

I don’t think it’s surprising that I had no idea what was happening or what I was supposed to do. The moment I was passed the ball the first time, I froze. All around me were aggressive, passionate rugby players, and I had no idea what direction to go!

The opposite team all converged on me, and two solid hands grabbed the rugby ball and pulled. I might not have known what direction to go, but I knew better than to let that ball go.

The next thing I knew, I was at the center of a maul. Basically this means that I was holding the ball, had an opposing team member holding onto me, and then a member of my own team supporting me so I didn’t fall. And, like a chain, everyone else hooked onto their team members. The point of this is to push the maul towards the goal, with no one toppling and everyone remaining on their feet.

Being in the center of a maul is absolutely terrifying. I just remember there being limbs everywhere, everyone was pushing on me, I was struggling to stay on my feet, Coach was yelling something. Eventually, the maul toppled, and we collapsed in a mass of limbs and bodies.

As terrifying as that moment was, and despite the fact that I dropped out of the club a mere month later, I don’t regret trying it. I made a lot of memories, like learning how to mold a mouth guard to my teeth, having countless bruises on my legs from my poor tackling skills, singing and laughing and joking with all the other girls.

Now, when I watch or hear about rugby, there’s meaning to it. There’s meaning that I never would have recognized if I hadn’t stepped out of my comfort zone and pushed myself to do something new. I know myself better now, too, and I’m more confident for having tried and failed.

Ultimately, failure isn’t bad. It’s good- an opportunity to learn and grow into yourself. Don’t let the fear of failure stop you from trying; that’s when you really lose out.