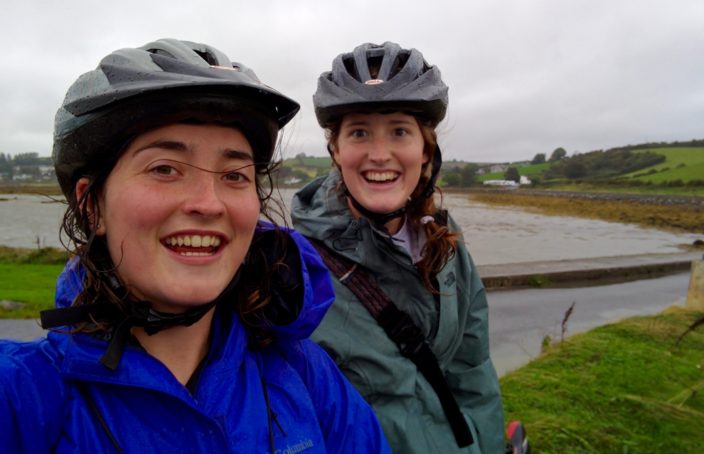 I blame Billy for this whole fiasco. If he hadn’t mentioned a previous student biking to the sea, Erin and I never would have gotten the idea in the first place.

As it was, Billy shared with our small group some of the benefits of studying abroad in Ireland and told us about all the adventures we could have on the weekends. BAM! Erin and I got bit by the adventure bug. It was decided. We were going to bike to the sea.

Step One: Rely On Sense Of Direction (Even If You Don’t Have One)

Did we research where to go? No. Do we bike regularly? No. This, my friends, is the recipe for success.

Let’s just say that it took us about an hour to get out of Belfast alone… I’m pretty sure it was only supposed to take us twenty minutes. Oops.

We had awesome weather for the three months we were in Northern Ireland. It was sunny and bright and not horribly cold for the majority of our time there. Saturday, September 24, 2016, was the exception. I knew it was going to be rainy. Heck, I even asked Erin if she wanted to postpone. Logically, we were on an island. It could be raining that Saturday until kingdom come, right? Right. We went anyways.

It was raining the whole time we were gone. My rain jacket stopped functioning at hour three. We never saw the sun. Soggy sandwiches were eaten under dripping trees. My fingers almost didn’t recover from being raisins.

Our on-a-whim destination was 15 miles away. We “planned” to go to Comber, eat lunch, and bike back. Easy! It’d be two hours of biking, three MAX.

We got lost multiple times getting out of Belfast. My bike started making noises. Erin’s bike was too tall for her. It took us two hours to get to Comber and we were disappointed by the lack of actual sea. What did we do? Went to Whiterock. It’s an additional 8 miles. No big deal. We’d take our time, bike down there, and then catch a bus back to Belfast!

One small kink in our plan… Whiterock was barely a town. At this point, we were exhausted and freezing cold. My fingers were white from lack of blood flow.

We stopped in the warmest café. We approached the lady behind the counter: “Buses? Oh, girls, you’re in the wrong part of the country!”

She directed us to Killinchy. Okay. 7.3 miles away. Erin and I trudged back out into the cold. We could do this.

Of course, Killinchy was even smaller than Whiterock. There was no bus stop in sight. Finally, a man walking his dog heard my plea and I almost started to cry when he actually came over to talk to me. Maybe my pathetic sounding  “We’re lost, please help us!” touched his heart of gold.

Step Five: Never Give Up

On his advice, we biked the 6.5 miles back to Comber.

We waited an hour for the bus to come… only to have the bus driver take one look and tell us bikes are no longer allowed on buses. (They are, however, allowed on trains. Take note, future adventurers).

Erin worked her charm and he relented. Two dripping and drooping young women climbed aboard the warmest, coziest bus on the whole island, dragging lumps of metal behind them. As we fought to get the bikes off of the bus the driver said, “That’s why you can’t have bikes!”

Four miles later we arrived back home. Just in time for cold pizza, a movie, cookies, and brownies. I think we deserved them.